‘I loved when the instruments came into the hall playing the football song!’ Michael (aged 5)

Tickets are now on sale!

This is the programme for the 2022 Children’s Concerts.

HANDEL – The arrival of the Queen of Sheba

JONATHAN WILLCOCKS – Jack and the Beanstalk (for narrator and orchestra)

KLAUS BEDELT – Pirates of the Carribean

RONAN HARDIMAN – Lord of the Dance

Hear how it goes!

Neil Henry works extensively as a close up magician and  ‘Magical Emcee’ including The Henley Festival, Café de Paris, Magic Night, The International Brotherhood of Magician’s annual Gala Show in Belfast, the Cellar Door (Covent Garden) and Volutpe. He is constantly in demand to perform his breathtaking magic and mentalism around the country. Magic Residences include The Henley Festival, Epsom and Sandown Racecourses, The King’s Head Theatre, Islington and performs his magic monthly for the Magic Night in London’s West End. He can also be seen regularly entertaining with his magic in Covent Garden. Neil has performed for Reuters, Harrods, Shaftsbury, The Crown Estate, The Olympic Committee, Sister PR, War Child, BBC Television, the National Lottery, ITV Television, McClaren (The Racecar company, not the buggy!) The Old Vic Company, Ascot Racecourse and had been asked to perform at many private parties including Colin Firth, Robert De Niro, Hugh Laurie, Ant and Dec, Harry Enfield, Ronnie Corbett, Richard Caring. and many more prestigious events, parties including for the Queen at the ROYAL VARIETY PERFORMANCE. Neil has performed in many theatres around the world including the Cambridge theatre in the WEST END, London and City Center theatre on BROADWAY, New York.

Each year some children from participating schools contribute designs for the covers of each concert programme. These were the 2020 winning programme cover designs, designed by (left to right) Francesca, Joseph, and Lucy. Congratulations to all of you! We look forward to seeing the children’s artwork next year. 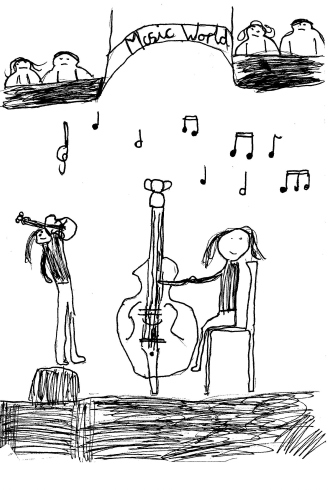